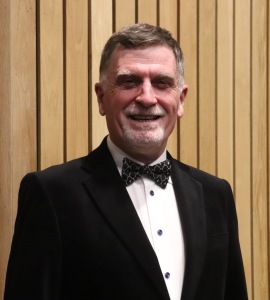 Walker Ewart is a native of South Derry in N. Ireland and is living currently in Bangor Co. Down.

He has been an adjudicator for 22 years, working mainly throughout Ireland and Scotland. He has adjudicated the British One-act Finals twice; the three All-Ireland Finals (Open Full-length in Athlone, Confined Full-length and One-Acts) twice; the Ulster Drama Finals and the Scottish finals once.

Having worked in education as a teacher of Modern Languages and then as a member of the Education and Training Inspectorate for 38 years, he was awarded an O.B.E. for ‘services to education’ in 2012 on his retirement.

He has been involved with amateur drama since teacher-training college in 1975 as an actor, director and administrator.

He is currently a volunteer French teacher for the University of the Third Age.  He is also the Chair of the Panel which adjudicates new Irish play-writing by amateurs organised jointly by the Drama League of Ireland and the Amateur Drama Council of Ireland and sponsored by the Ramor Theatre, Virginia, Cavan.

He is very much looking forward to being your ‘remote’ adjudicator.